A recent study carried out in the UK compared three commercially available volumetric blood collection devices with conventional dried blood spot cards for accuracy and precision, and applicability in the clinical laboratory. The study found that volumetric devices were superior to conventional DBS cards on all parameters tested, and Capitainer is the chosen device for implementation.

Phenylketonuria (PKU) results from an enzyme deficiency that leads to a toxic buildup of phenylalanine (Phe) in the brain. Because early dietary restriction of Phe has led to greatly improved outcomes for people living with PKU, screening and detection in the first few days after birth and long-term monitoring are critical components of PKU care. This is further illustrated by the fact that in many parts of the world, clinical guidelines for PKU specifically recommend age-related Phe target-treatment ranges to prevent adverse neurological events. Although less widely practised than Phe testing, tyrosine (Tyr) may also be measured simultaneously with Phe to demonstrate that PKU patients are not Tyr-deficient as a result of dietary restrictions.

DBS technology originates from the work of Robert Guthrie, who introduced a method for collecting whole blood on specially designed filter papers that are commonly referred to as “Guthrie cards” or conventional DBS cards. Motivated to develop new testing methods for several metabolic disorders including PKU in the 1960s, Guthrie envisioned dried blood spots on these cards as a sample matrix that was easily collected, transported and tested.

Despite widespread usage of conventional DBS cards, the volume of blood applied to the filter paper is known to significantly impact testing accuracy. This is because sub-punches from the paper can result in inconsistent blood volumes and other issues such as the hematocrit (Hct) effect – whereby the proportion of red blood cells in the blood influences blood viscosity – which influences the outcome of analyte measurements (1).

In recent years, a number of volumetric blood collection devices have emerged, which are reported to be more accurate, precise and less vulnerable to the Hct effect.

The devices evaluated in the study included the HemaXis-DB10 (by DBS System SA, Switzerland), the Neoteryx-Mitra device (by Trajan Scientific and Medical, US), and Capitainer-qDBS* (by Capitainer, Sweden).

The study, which was published in the peer-reviewed journal Clinical Chimica Acta, found that volumetric devices were superior to conventional DBS cards on all parameters tested (2). Of the three devices tested, Capitainer’s device was the most precise in repeated Phe and Tyr measurements. In addition, Capitainer-qDBS* was least vulnerable to concentration-dependent bias compared to liquid blood, and was not affected by the Hct effect, as determined by measuring Phe and Tyr in samples with varying levels of Hct.

In the study by Carling et al., a sample of whole blood was collected from a healthy volunteer and split into three pools. One of the pools was used exactly as it was, while the other two were enriched to give mid and high concentrations of Phe and Tyr. The mid-range pool was further split into three pools, which were each adjusted to contain various concentrations of Hct.

The samples were then applied to the three volumetric devices included in this study according to manufacturers’ guidelines. For comparison, the samples were also applied to a conventional DBS card comprised of PerkinElmer-226 filter paper, and a PerkinElmer-226 Bioanalysis card, which differs to the conventional card by containing four pre-perforated 8 mm discs to which the blood is applied.

Dried blood spots were then removed as filter paper discs from the devices and cards, either by sub-punching, detachment from the pre-perforated discs, or using a device-compatible removal tool. Blood was then eluted from the discs using an established method described elsewhere (3), while whole blood samples were extracted following that same method followed by protein precipitation.

The concentrations of Phe and Tyr were then analysed in the resulting samples by flow injection analysis tandem mass spectrometry. This workflow allowed the team to evaluate each device or conventional card for its vulnerability to the Hct effect, effect of blood volume applied to device/card, bias, and imprecision. Based on the outcomes of these analyses as well as assessments concerning ease of DBS removal, blood volume collection accuracy, environmental impact, possibility to store patient details, and device throughput, the team compared all devices and cards for applicability in a clinical lab setting.

The main findings from the study are that for Phe and Tyr analysis, the three volumetric collection devices outperformed the conventional DBS cards with respect to effect of blood volume applied, impact of Hct effect, bias and imprecision.

Application of different blood volumes to all three devices did not effect the measured Phe and Try concentrations, while the measurements of analytes from the PerkinElmer-226 conventional card were significantly impacted, to unacceptable levels, by blood volume applied.

With respect to the Hct effect, the study, which aimed to reflect the extremes of Hct that may be encountered clinically, revealed that an increase in Hct had a significant impact on one of the volumetric collection devices, while the performance of Capitainer®B was not affected by increasing Hct levels. The PerkinElmer-226 conventional DBS card was very vulnerable to the Hct effect, with significant variations in Phe and Tyr measurements over increasing Hct concentrations. When assessed for precision, Capitainer®B excelled over all other cards and devices tested, with an imprecision rate of ≤ 2.1 % based on repeated measurements of Phe and Tyr.

The study by Carling et al. highlights the importance of volumetric blood collection devices in overcoming the drawbacks of conventional DBS testing in screening and monitoring of analytes where accuracy and precision matters, e.g., in diagnostics and in monitoring patient responses to drugs. As well as being the most precise device in the current study, the authors also highlight the high level compatibility of Capitainer®B with existing workflows in a newborn screening or metabolic laboratory.

The authors furthermore acknowledge that the disc removal tool that is designed specifically for Capitainer®B ensures fast sample processing into a 96-deep well plate and also builds an automatic patient list by scanning patient identifier barcodes. In addition, the use of Capitainer’s device leads to minimal plastic waste since the bulk of the device is card, in contrast to the other volumetric devices tested.

In summary, the findings of this study clearly demonstrate the vast potential of Capitainer®B to enhance testing and monitoring for PKU patients through improved analytical accuracy and precision, which can lead to better patient outcomes. 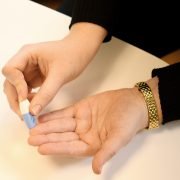 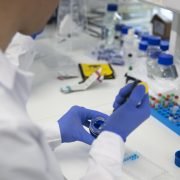 An Introduction to Therapeutic Drug Monitoring and Possibilities With DBS 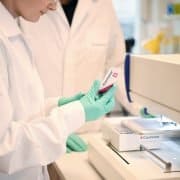 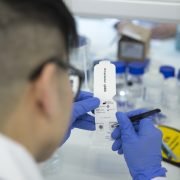