Welcome to our blog series about dried blood spot (DBS) testing, a microsampling method that is widely used to analyse molecules associated with human health and disease.

In this first instalment, you will learn about what DBS is, how it is performed and some of its applications. We will also compare the sampling methods used in DBS testing, and look at how recent developments in microsampling have transformed DBS testing into a highly accurate and robust method with vast applications in disease screening and monitoring, diagnostics, and much more.

So what is dried blood spot (DBS) testing?

DBS testing is a microsampling method based on dried spots of whole blood, which has been used for qualitative or semi-quantitative analysis of hundreds of molecules, including nucleic acids, elements, small molecule therapeutics, proteins, enzymes and antibodies (1).

DBS arose from work carried out in the 1960s by American microbiologist Robert Guthrie, who wanted to develop new testing methods for the rare metabolic disorder phenylketonuria (PKU), which affected several young members of his family. He envisioned dried blood spots as a sample format that could be easily collected, transported and tested for the analysis of metabolites associated with disease. You can read more about Guthrie’s work and PKU screening and monitoring in our recent blog post here.

How is DBS testing performed today?

DBS testing involves removing blood from an individual, and immediately applying this blood to a pre-prepared DBS filter paper for drying. This workflow reduces or even eliminates the need for downstream sample preparation, since circular discs punched from the filter paper serve directly as the sample for many downstream testing applications in microtitre plates.

Although both DBS sampling methods are used today, capillary sampling offers many advantages over venous blood draws. Firstly, it allows the collection of small volumes of whole blood from the fingertip or heel in a minimally-invasive manner. This is in contrast to venous blood draws that can be uncomfortable or even traumatic, especially when testing children and/or when used for regular disease monitoring in at-risk individuals.

Furthermore, a venous blood draw may only be performed by a trained phlebotomist, while a capillary sample can be taken anywhere without the need for trained personnel, allowing self-sampling and at-home/remote testing, which greatly expands the possibilities for testing in regions where access to trained phlebotomists is limited.

In comparison to conventional blood testing methods, where whole blood or blood fractions derived from venous draws constitute the sample format, a major advantage of DBS samples – irrespective of sampling method – is their amenability to storage and shipping under ambient conditions. This allows home- and remote sampling and allows laboratories to receive samples by mail from larger geographical areas than would otherwise be possible.

Over the years, DBS testing has become the preferred sampling method in newborn screening (NBS) programmes throughout the world, and it is also widely used to monitor patients with inherited metabolic disorders (1,2).

In addition to NBS and rare disease monitoring, DBS has also been used in the diagnosis and serological surveillance of infectious diseases, including syphilis, trypanosomiasis, congenital rubella, and COVID-19, and the method is currently recommended by the World Health Organisation for the diagnosis of HIV and hepatitis B and C (3).

Quantitative DBS sampling also has major applications within serology, given the general stability of antibodies for several weeks at room temperature in DBS samples, and the documented good correlation between antibody concentrations in DBS and serum/plasma samples (4). DBS testing is also used to identify long-term alcohol consumption in diverse fields including occupational health, family law, and forensic medicine. The applications for DBS testing will be covered in more detail later in this blog series.

Conventional DBS testing has some drawbacks

While DBS testing has proven successful in qualitative analyses, quantitative analyses require an exact sample volume, and this is not a guarantee with conventional DBS sampling for several reasons.

Firstly, the size of a blood droplet from a finger prick can vary depending on many factors, including the size of the lancet used to draw blood, individual blood circulation, and hand temperature of the person being tested, to name a few.

Furthermore, it is impossible to determine the volume of blood that is released onto a conventional DBS filter. A common practice is to sub-punch the filter to produce a disc of known size, which is assumed to harbour a fixed blood volume. Although this approach is widely used, its accuracy is hampered by the hematocrit (Hct) effect. Here, the proportion of red blood cells in the blood influences blood viscosity, which in turn influences how the blood diffuses through the filter, potentially leading to sub-punches from different regions yielding completely different analyte readings (5).

The Hct effect and problems with determining exact sample volumes render conventional DBS unsuitable for accurate analyte analysis. These drawbacks have promoted the emergence of specially-engineered dried sample collection devices in recent years, which are designed to collect a set volume of capillary blood in the device to circumvent the Hct effect.

Capitainer®qDBS is one such device that has been proven to collect an accurate blood volume of 10 µl every single time. This device is based on Capitainer’s qDBS technology, and is very user-friendly with an automatic indicator allowing the user to quickly verify that sampling was successful. In addition, the qDBS technology prevents over- as well as under-filling.

Capitainer®qDBS also circumvents the Hct effect because the integrated DBS filter paper disc is pre-cut prior to blood sampling to perfectly fit the wells of a standard 96-well plate, allowing the entire DBS disc to be used for downstream analysis.

A recent comparative study undertaken by Altasciences, a contract research organisation working with pharmaceutical companies in drug development, revealed that Capitainer®qDBS delivered accurate and precise blood volumes, was straightforward to use, and was devoid of the limitations of conventional DBS, when used in the quantification of a panel of 15 anti-epileptic drugs.

That was it for Part 1 of our series about DBS testing. Stay tuned for Part 2, where will look into the applications of DBS testing within the infectious disease area. 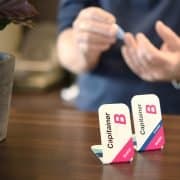 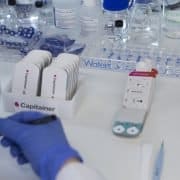 Quantitative Serology Made Possible With Capitainer®qDBS 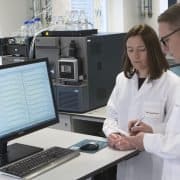 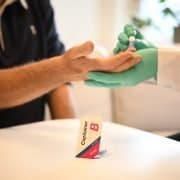